KITCHENER, Ontario – December 1, 2020 – Video creation, hosting, and sharing platform for business provider, Vidyard, today announced an integration with Slack to bring Vidyard’s free, asynchronous video messaging functionality to Slack. Slack is the leading channel-based messaging platform, used by millions to align their teams, unify their systems, and drive their businesses forward. With this integration, their users can further enhance team collaboration by recording videos and sending them directly as messages within Slack using Vidyard’s tools.

The integration with Slack brings Vidyard’s free application to a massive global audience of business users at a time when it’s more important than ever for sellers, marketers, and business leaders to find more personal and engaging ways to deliver their messages remotely. Vidyard is the fastest way to create, host, and share video updates and screen recordings within Slack that are timely and authentic–plus, video messages help humanize day-to-day communications between remote employees. It’s also the ideal application for times when it’s easier to quickly explain an idea on video instead of writing it out in a long, wordy, hard-to-follow email.

“Use screen recordings to improve collaboration and engagement between teams by showing instead of telling,” said Michael Litt, co-founder, and CEO of Vidyard. “The demand for asynchronous video communication that is both easy and accessible is skyrocketing. Millions of business professionals are already intimately familiar with how impactful video has been while working remotely. By integrating with Slack, Vidyard enables these users with an option to use video to communicate more effectively without the burden of needing real-time availability.”

Vidyard and Slack are particularly imperative during the COVID-19 pandemic, which has transformed the nature of work and normalized chat and video as the premier business communications tools. More people are working remotely, Vidyard makes it easier to supplement Slack messages as it becomes a more commonplace mode of communication in the absence of in-office meetings. Vidyard also helps replace casual office conversations. Instead of swinging by someone’s desk, people can send them a video or screen recording over Slack.

According to The 2020 State of Video in Remote Work report from Vidyard and Demand Metric, 94% of study participants now use video-conferencing for work, while more than 50% report they’re creating more pre-recorded videos than ever before.
“Vidyard helps business professionals work from anywhere, fight remote work fatigue, and potentially avoid their next online meeting,” said Tyler Lessard, Vidyard’s Chief Video Strategist. “By using Slack and Vidyard together, those possibilities expand. When you have more to say to a co-worker than can be easily written and want to avoid a lengthy virtual meeting that can be a hassle to coordinate, send a video message with a screen recording using the Vidyard integration within Slack instead..”

This year has been transformative for Vidyard and its customers. Since January, Vidyard has:

About Vidyard
Vidyard helps businesses and professionals connect with their audiences in a whole new way through engaging, personalized, and measurable video experiences. Through its global video hosting and analytics platform, Vidyard empowers businesses like LinkedIn, Zycus, League, Stanley Black & Decker, and others to transform their approach to marketing, sales, and corporate communications. Through its free and pro tools, Vidyard helps any business professional create and share custom videos to deliver their message in a more personal and impactful way. Thousands of businesses and millions of people around the world rely on Vidyard for their video needs. Sign up for Vidyard for free: https://www.vidyard.com/free-screen-record 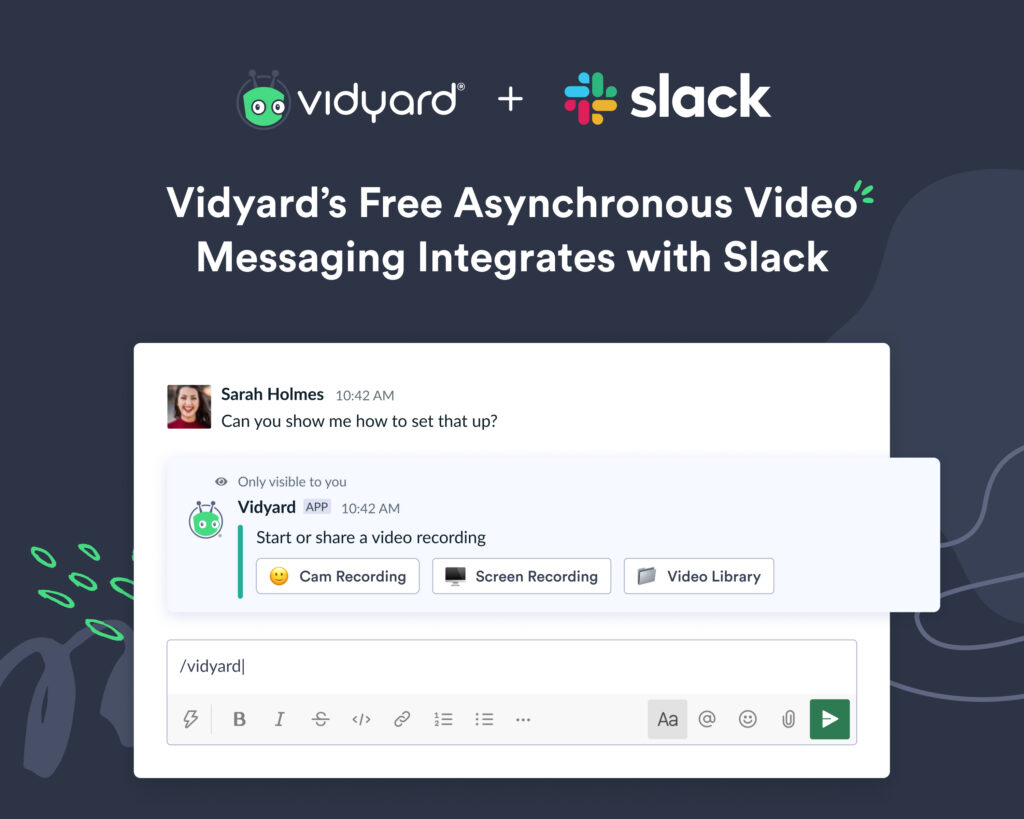 Vidyard’s new integration enables Slack’s users to ‘show’ instead of ‘tell’ by creating and sharing videos with teammates with just a couple of clicks–and it’s all free.