In the competitive world of social media marketing, it can be hard to ensure your brand’s efforts stand out from the crowd on an established platform like Twitter. One of the best ways to have your voice heard and to engage your target audience is to leverage one of the fastest growing social tools: Twitter video.

According to statistics gathered by Wordstream, 82% of Twitter users watch video content on the platform. People watch 2 billion videos on Twitter every day, according to research from Hootsuite.

Video content stands out on Twitter amongst a sea of text-based posts. And using Twitter video for your business helps tap into user behaviors already established across the web. In fact, according to Wordstream’s research, one-third of all online activity is now spent watching video.

Online audiences have an appetite for more video content across social networks, which gives your brand an opportunity to capture new audiences with the right Twitter video marketing strategy.

What Are the Benefits of Using Video on Twitter?

There are many reasons why your brand should embrace Twitter video. Video is a particularly social medium, and it’s well suited to both informing and entertaining audiences. It offers a great opportunity for your brand to connect with its audience on a more personal level.

Brands that adopt Twitter video—and use it well—are rewarded by users with higher engagement rates.

According to research commissioned by Twitter, Tweets containing videos earn:

By getting more engagement, your Tweets can reach more Twitter users and attract new audiences to your brand’s account.

It Drives Users to Take Action

Twitter video often inspires users to take action based on what they’ve viewed. A recent report found that 79% of people would rather learn about a product through video rather than text. And even more importantly, 84% of users have purchased a product based on a brand’s video. When done the right way, Twitter videos can turn browsers into buyers. 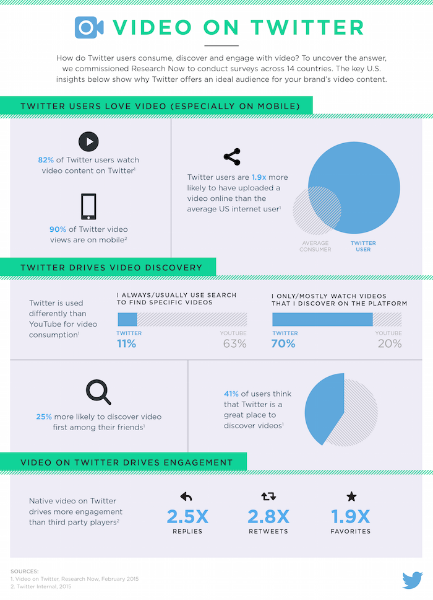 Now that you know how powerful branded video can be on Twitter, it’s time to explore the different Twitter video formats available to your business. It’s a good idea to test out a few different approaches and track what works best with your audience.

Linked videos are a quick and easy choice for integrating video into your Twitter marketing efforts. All you need to do is include a link to a video that’s hosted elsewhere within the content of your Tweet. If you choose to share links to videos housed on YouTube, Vimeo, or Vidyard users will be able to preview and play the video within their Twitter feed. (Fun Fact: Vidyard videos also retain any associated calls-to-action.)

Allowing your audience to watch video without having to click through to a link can help with engagement.

This Tweet shows what it looks like when you share a Vidyard video to Twitter. The preview includes the video thumbnail, title, and description. While the embedded version will open a new window, in the Twitter feed, this type of video plays inline.

Video is the best way to get your message across and create a personal connection with your audience. Vidyard allows you to easily share your videos to all the most popular platforms with just a few clicks.

Get started for free today!https://t.co/ZV2U5yl1pC?

Learn more about how Vidyard and Twitter work together on the Vidyard Knowledge Base.

Native video refers to content that you record and upload directly to Twitter, rather than hosting it elsewhere. Here’s all you need to know about using native video on Twitter for your business.

Want your Twitter video to stand out on a crowded timeline? Follow these tips and best practices to create videos that are memorable and shareable.

FreshBooks uses Twitter video to show the human side of the brand, with a fun look at their Halloween spirit. As a bonus, the video doubles as a recruiting tool.

Here’s a little taste of just how much we love #Halloween at FreshBooks! pic.twitter.com/KXvYu7cmfN

Sharing a native video you’ve recorded to Twitter is simple. Follow these steps and you’ll be a pro in no time:

Hey Orca’s Twitter video does a good job of driving interest to their webinars. The video features experts who will lead the webinar and offers some insights about what content to expect.

Don’t miss out on our next webinar TOMORROW at 2pm EST with @MattNavarra as we highlight all the trends in social media in 2019 and what to look out for in 2020! You won’t want to miss this!

Save your seat here: https://t.co/xucJi3iMuppic.twitter.com/3vab62MoFC

General Electric uses their own employees to offer viewers a backstage look at their complex work. Their videos are educational and engaging, and the perfect short format for Twitter.

While the CF6 engine is a large and powerful jet engine in its own right, the new GE9X is a total monster by comparison. And despite having a fan diameter of 134 inches, the GE9X engine is the most fuel-efficient jet engine in its class that we have ever created.

You can stream live video content to your Twitter feed using Periscope. You don’t even need to download the Periscope app to take advantage of this feature: You can simply use your Twitter account to log in. Most live streams are done using a smartphone, but you can also use a computer.

Twitter measures some insightful viewership metrics for your live Periscope videos. You’ll get data about:

Twitter video ads are just what they sound like: They’re advertisements that use video to drive awareness and action for your brand on Twitter. There are several different video ad units to choose from.

Here are some tips to make sure your Twitter video ads jump out from people’s timelines and stick with them.

This short video ad from Trustly features the brand’s logo in the upper left-hand corner throughout—ensuring that even those who only watch for a few seconds still see it.

Online banking payments are becoming increasingly popular because of their ease-of-use and security. Boost your online business with Trustly. pic.twitter.com/KZ2X0sxxH7

The best way to share video ads to Twitter will depend on the ad format you choose and your marketing goals. Twitter for Business has a complete rundown for you. Here’s how to upload your videos so they’re available in your ad account:

This video ad from Tieks offers simple but effective visuals to pair with a compelling offer. The video stands on its own without audio or text, but perfectly complements the message of the Tweet.

It’s important to measure the results of your video ad campaigns to ensure you’re getting your money’s worth. Here are some of the key metrics to pay attention to: