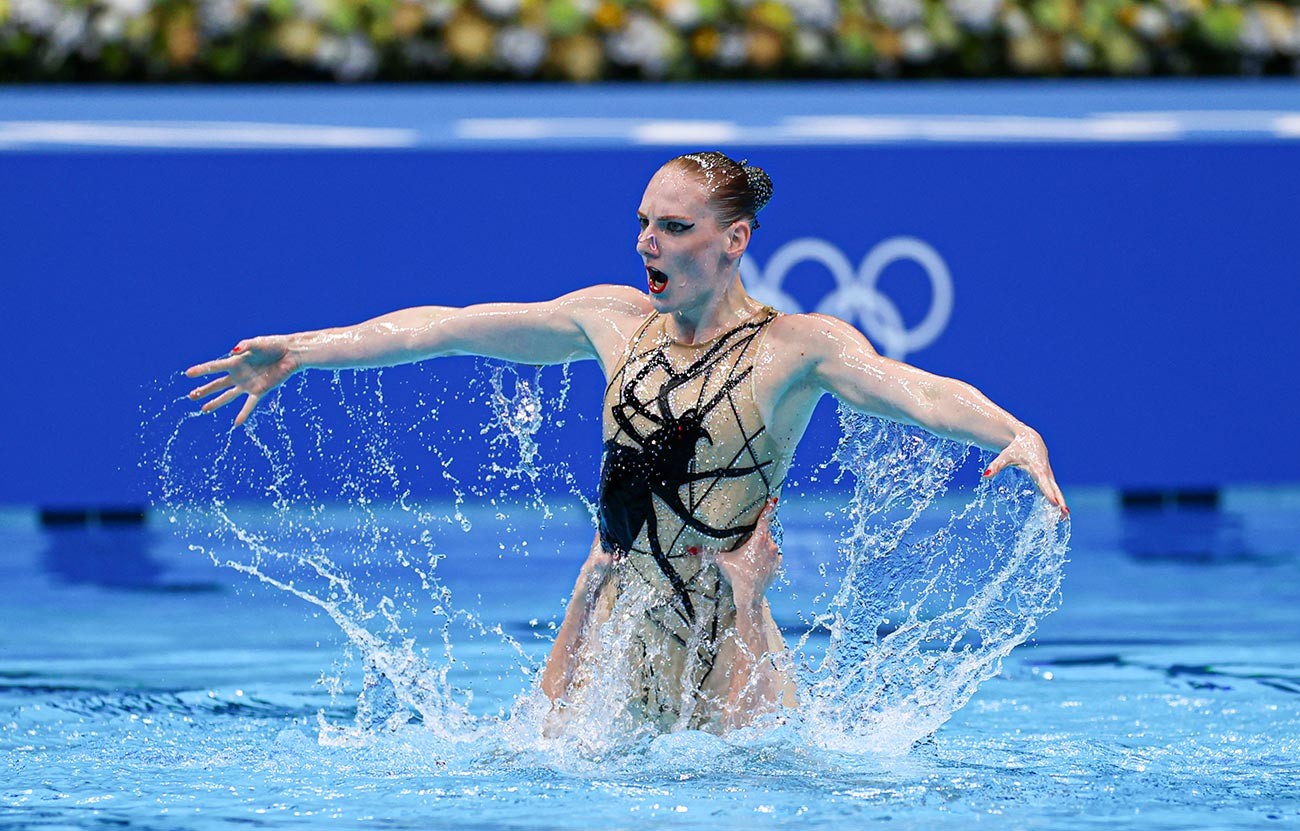 31-year-old Svetlana Romashina, mother of three-year-old daughter and 21-time world champion in synchronized swimming broke her own record and the world record on August 4, 2021, and with it won Olympic gold for the seventh time – the first synchronized swimmer in Olympic history to do so.

The champion cried at the awards ceremony. According to her, it was difficult for her to return to the sport after the birth of her daughter. Now Romashina is ending her career as perhaps the most successful synchronized swimmer in the world. 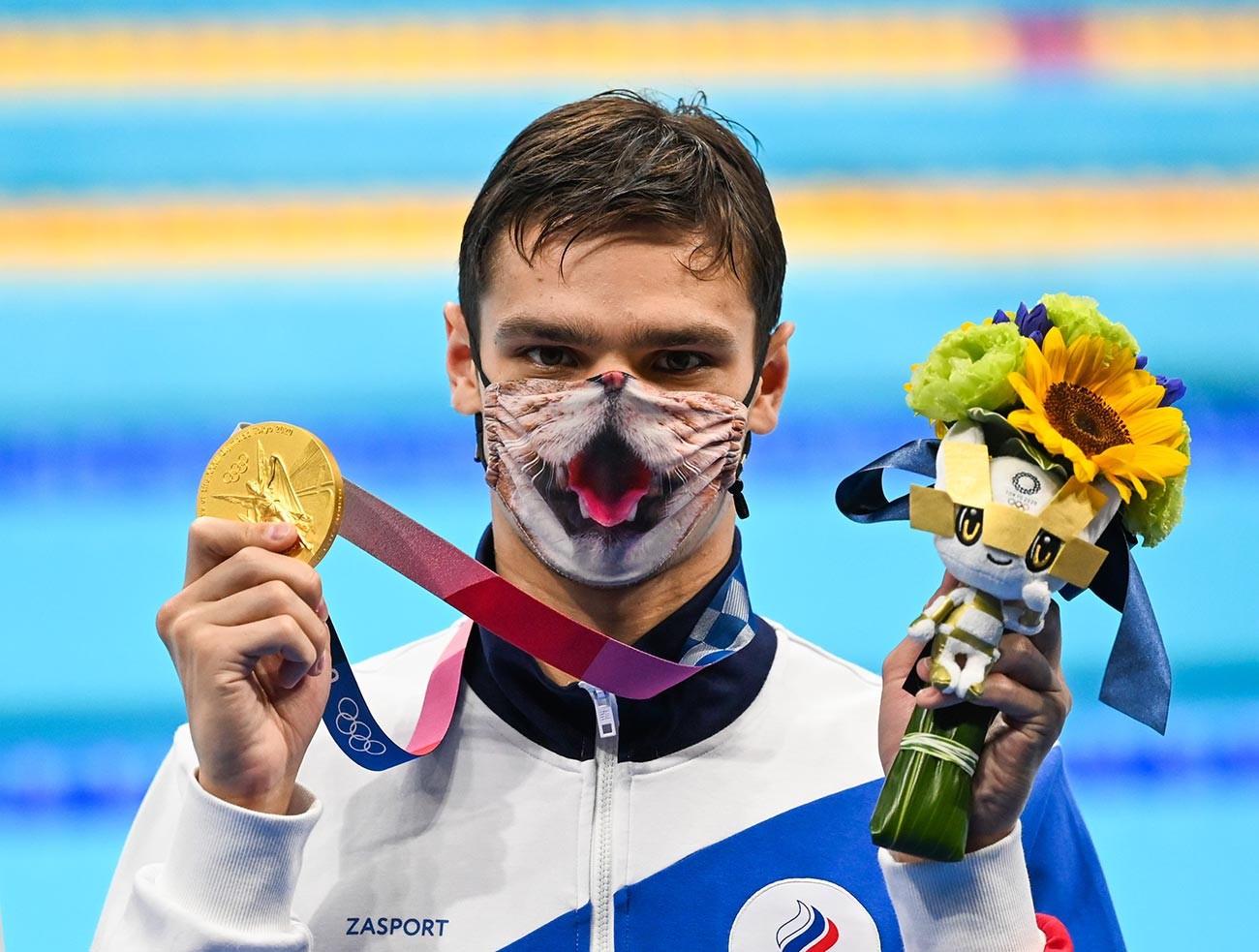 Evgeny Rylov of Team ROC poses with his gold medal for the Men’s 200m Backstroke Final of swimming during the Tokyo 2020 Olympic Games at Tokyo Aquatics Centre in Tokyo, Japan on July 30, 2021

Evgeny Rylov, 24, from Orenburg Region won two medals in the 100 meter and 200 meter backstroke swimming events. It is the first Olympic gold in this sport in 25 years for Russia. Rylov also set an Olympic record by swimming the 200-meter backstroke event in 1:53.27 minutes. Russian commentators were screaming their support as they cheered for Yevgeny, but the athlete himself was not happy with his victory.

“I was too tired to swim the last 50 meters. <…> I had a critical moment at the last 25 meters, when I realized I was paralyzed, my legs got cramped and I could hardly stand up till now. My legs cramped up really bad,” Rylov said.

At the awards ceremony, the games organizers, without explanation, forbade Rylov to wear his lucky mask with a cute cat, which he had worn in all the earlier heats.

“I want to cry. They wouldn’t let me wear the cat mask,” the Olympic champion complained.

3. First-ever victory of Russian gymnasts in the all-around competition 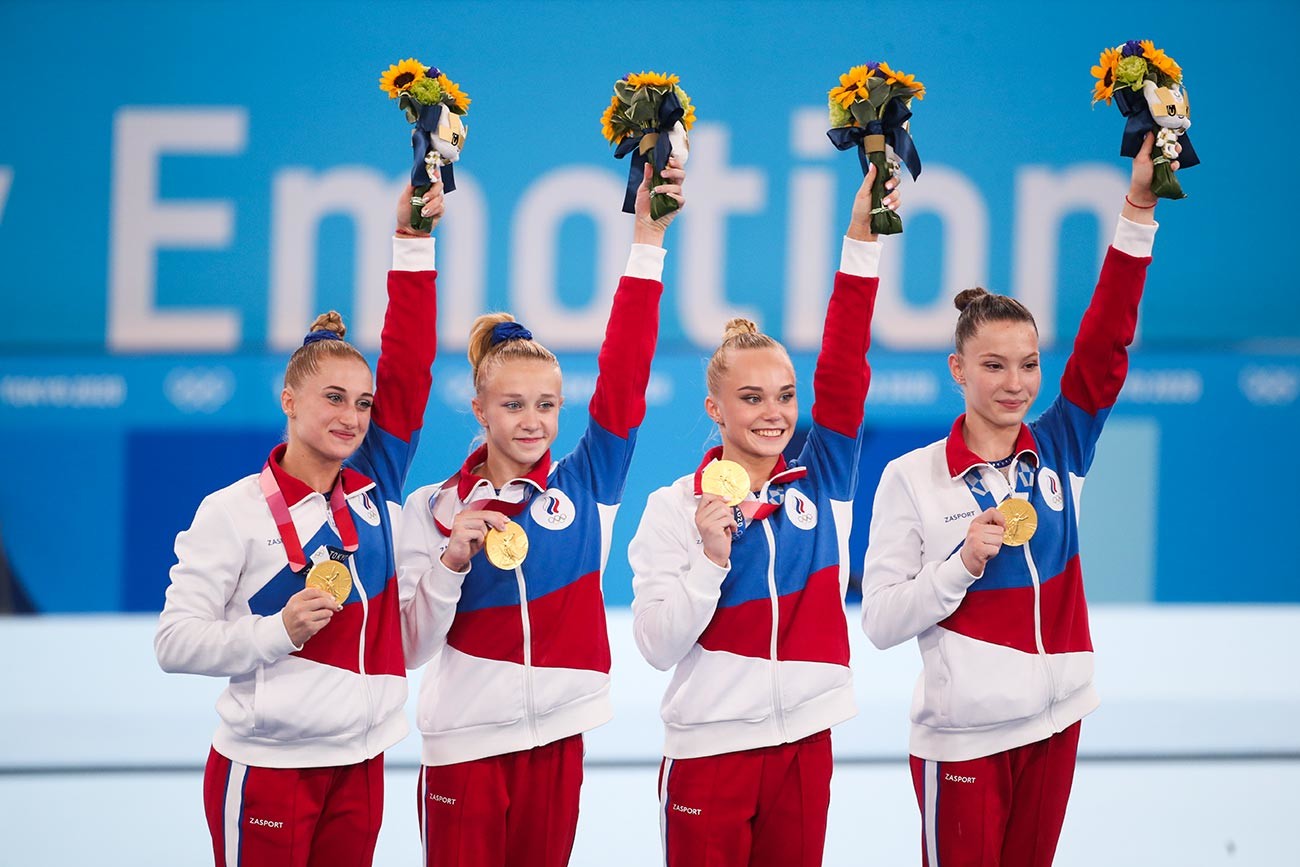 The ROC team with their gold medals on the podium, Vladislava Urazova, Viktoriia Listunova, Angelina Melnikova and Liliia Akhaimova during the Team final for Women at Ariake Gymnastics Centre during the Tokyo 2020 Summer Olympic Games on July 27, 2021 in Tokyo, Japan

Russian gymnasts had also previously won the all-around competition in 1992. But back then, the gold medal was won by the United Team that consisted of athletes from the former Soviet republics.

29 years later, in 2021, Russian athletes managed to take gold on their own for the first time. Victoria Listunova, Lilya Akhaimova, Angelina Melnikova and Vladislava Urazova made up the team.

4. The first victory of Russian men gymnasts in 25 years 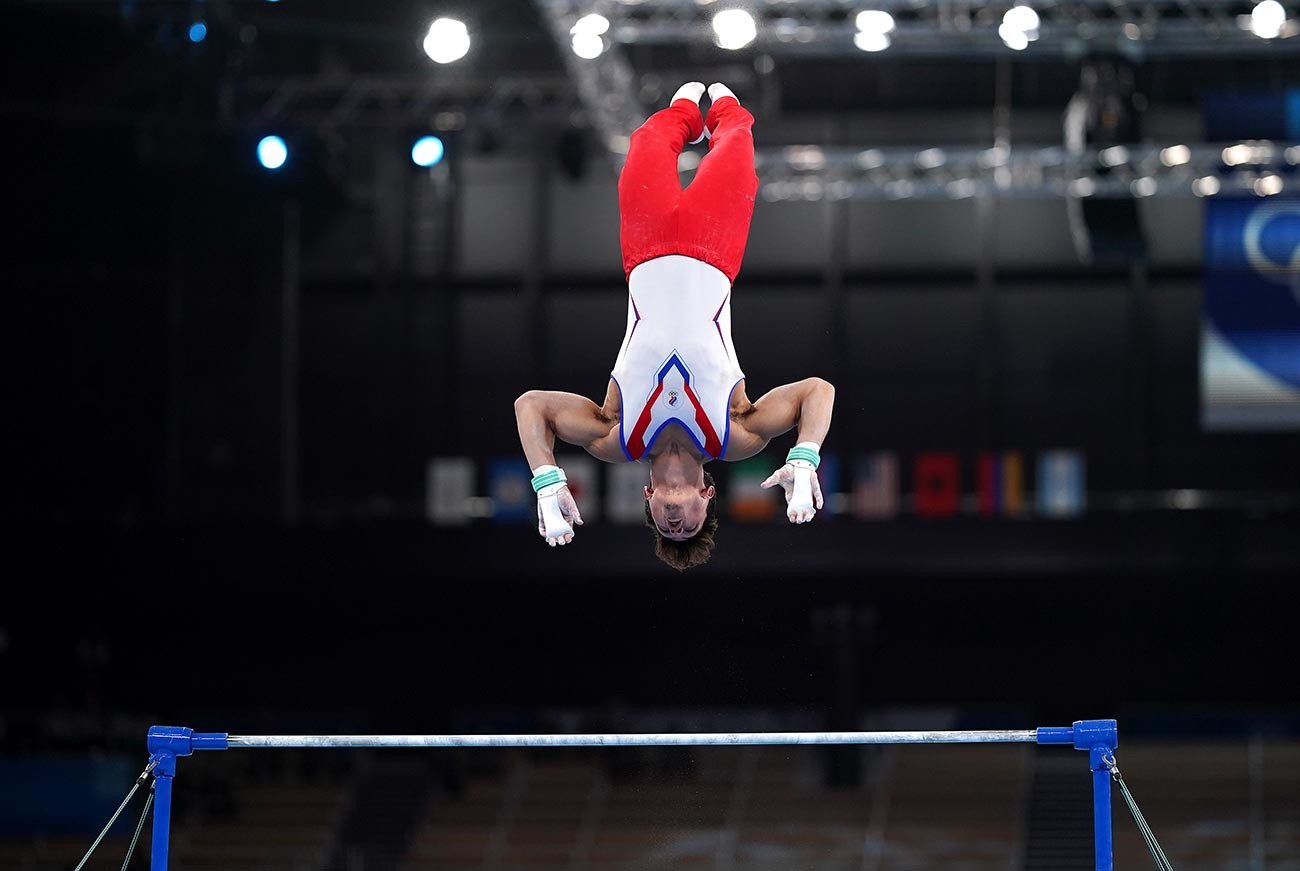 Russian Olympic Committee’s Artur Dalaloyan on the horizontal bar during the Men’s All-Around Final at the Ariake Gymnastics Centre on the fifth day of the Tokyo 2020 Olympic Games in Japan. Picture date: Wednesday July 28, 2021

It was especially hard for 25-year-old Artur Dalonyan, who tore his achilles tendon three months before the start of the Olympics.

“<…> If you let it suck you in, it will eat you up. Everyone has trouble in life and our bodies aren’t made of metal. <…>. After the surgery, when my tendon was sewn, the very next day, I came out of anesthesia and immediately started working,” said Dalonyan. 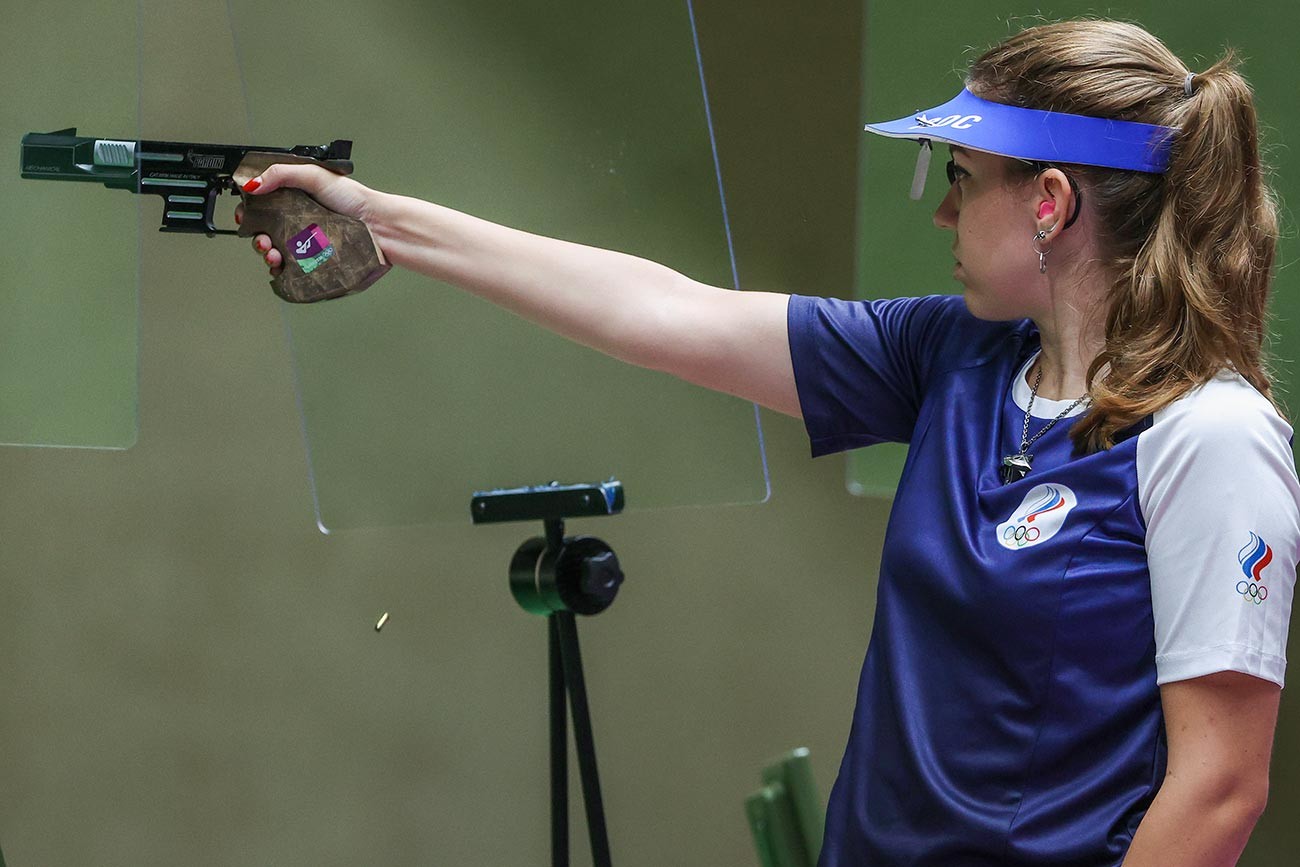 Vitalina Batsarashkina, 24, a cheerful shooter with a ‘cat school medallion’ from the universe of Polish writer Andrzej Sapkowski and The Witcher game series, set  another Olympic record for Russia.

With her trademark hand in her pocket, Vitalina won the gold medal using a small-caliber pistol from a distance of 25 meters and, at the same time, set an Olympic record by scoring 38 points.

The developers of The Witcher game series, CD Projekt Red, also congratulated her on her victory and she was met in her home town by a Russian chorus with a song from the Netflix’s eponymous show – ‘Toss a Coin to Your Witcher’. 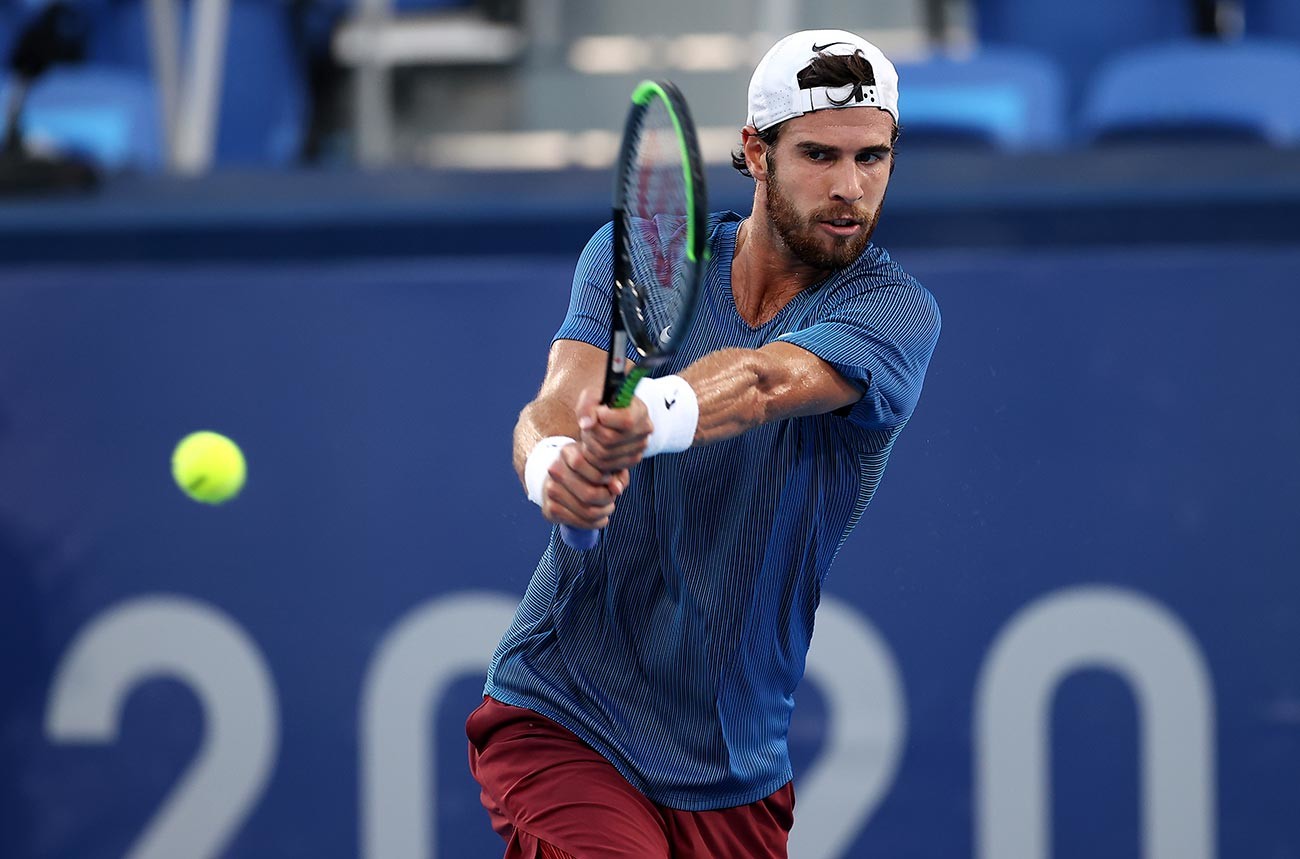 Karen Khachanov of Team ROC plays a backhand during his Men’s Singles Gold Medal match against Alexander Zverev of Team Germany on day nine of the Tokyo 2020 Olympic Games at Ariake Tennis Park on August 01, 2021 in Tokyo, Japan

Yes, the silver medal in tennis is also an important achievement for Russia, because Russian tennis players have not reached the final of the Olympic tournament since the year 2000. Back then, Evgeniy Kafelnikov won the first and only gold medal for Russia in the history of the Olympics by beating Tommy Haas of Germany.

Karen Khachanov, a 25-year-old tennis player from Moscow, won the silver medal for the national team. He lost to German athlete of Russian origin Alexander Zverev in two straight sets with a score of 6:3, 6:1.

“In any case, the [2020] Olympics is a successful tournament for me, a successful tournament for the country. I’m very glad I came to Tokyo. Of course, appetite comes with food. It’s a shame to be one step away from winning the gold. There is a bit of residue from the defeat; I’m upset now. But that’s part of sports, it’s a normal reaction. You can’t lose and say, ‘OK, it’s all right,’” Khachanov said of the match. 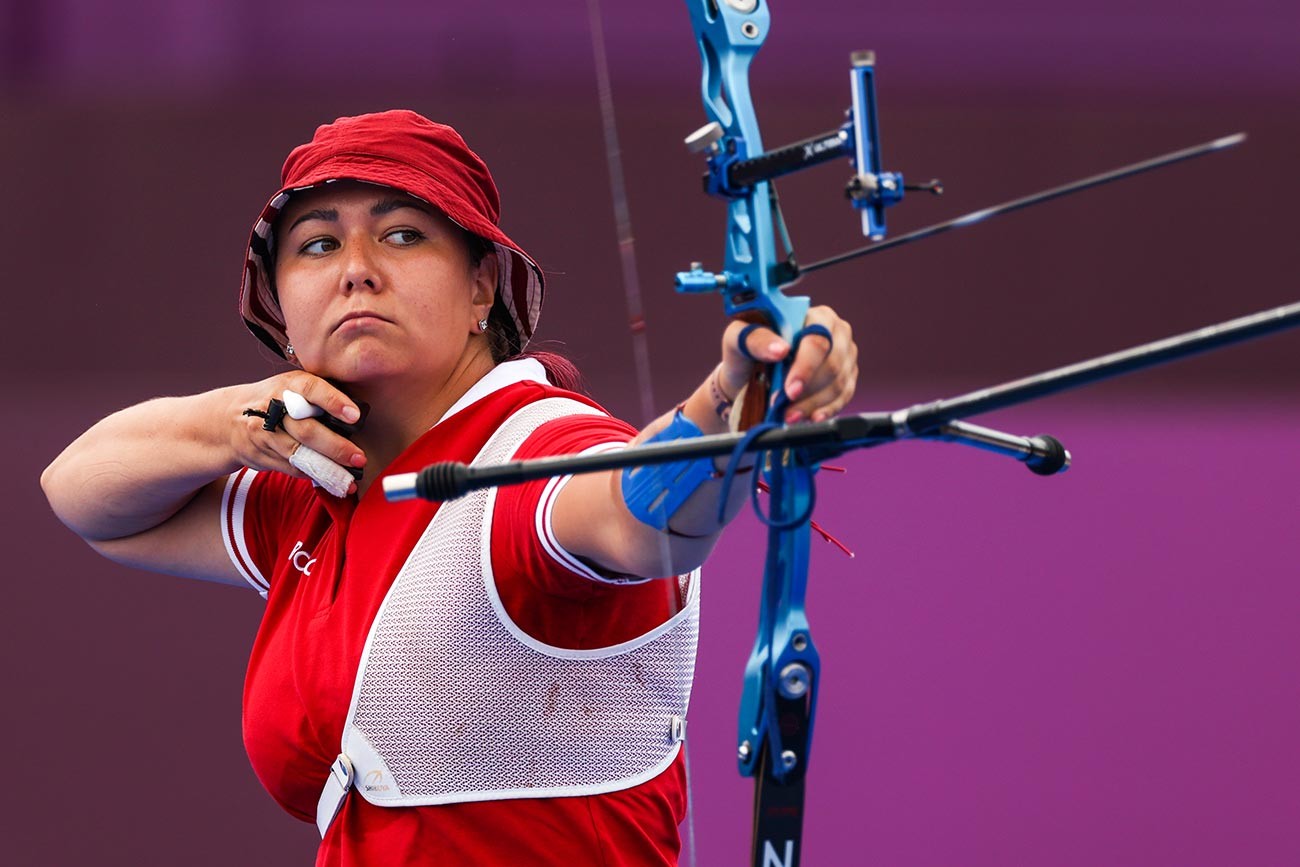 Elena Osipova of Team ROC competes in the archery Women’s Individual 1/8 Eliminations on day seven of the Tokyo 2020 Olympic Games at Yumenoshima Park Archery Field on July 30, 2021 in Tokyo, Japan

Elena Osipova, a 28-year-old archer from Kamchatka Region, won another important silver medal for Russia. It is the first medal for the Russian Olympic team in 29 years in the women’s individual archery competitions. According to Osipova, she had a chance to win gold, too, but she lost in the final to Korean Ahn San.

“In the decisive shot, my heart sank a little bit, so I didn’t take it as well as I would have liked. But, in general, I couldn’t have taken it to that point. I was too close. There was nothing to be done. In our sport, one miss may result in a loss, but a successful shot leads to a victory,” Osipova said in her interview with Izvestia.

Osipova also won the silver medal in the team event, which she said is more important for her than the individual championship.

8. The first and only Russian Olympic gold in athletics at the Tokyo 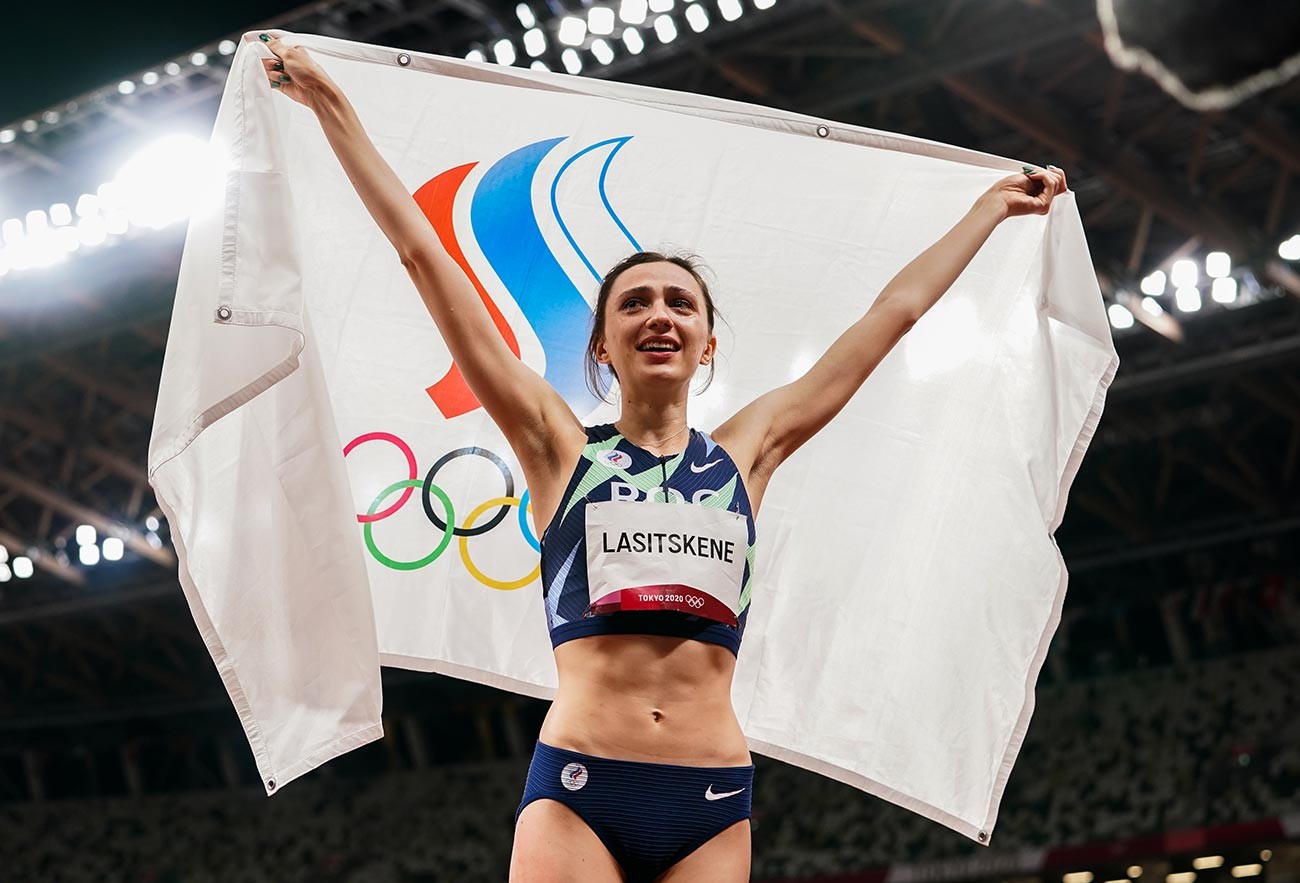 It was brought by Maria Lasitskene, a 28-year-old high jumper from Kabardino-Balkaria.The three-time world champion was supposed to win a medal at the Rio Olympics back in 2016, but she and other track and field athletes were banned from the Games, due to a doping scandal. In 2019, for the same reason, the athlete was not allowed to participate in a tournament in Glasgow, even under a neutral flag.

Maria’s disappointments didn’t end there: In May 2021, two months before the Olympics, she suffered a rear thigh injury during training and was forced to miss the Russian Athletics Championship in Cheboksary.

Prior to the Olympics, Maria didn’t jump higher than two meters, while her main rival, Ukrainian Yaroslava Maguchikh, had jumped 2.03 meters and was considered the favorite. However, at the competition, Maria eventually outdid herself and jumped 2.4 meters, surpassing the results of Maguchikh and Australia’s Nicola McDermott and clinching gold.

“The third attempt is always everything and there were already thoughts like, ‘How did you get here and what right do you have to be here?’ I don’t remember anything, nothing at all. Hazy. Staring at the bar and thinking, ‘God help me!’ The main thing for me is focusing before each jump,” Maria recalled.