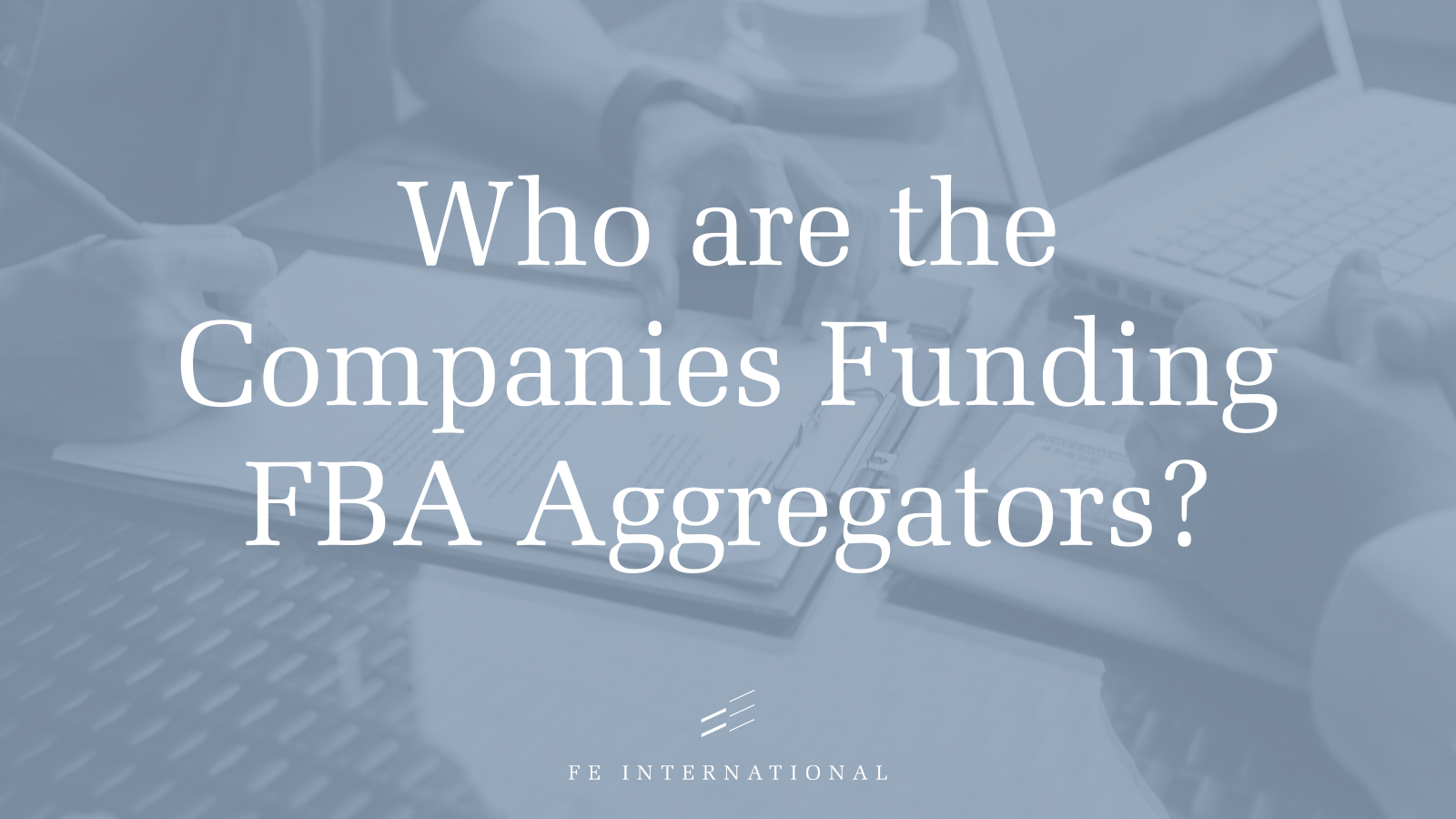 In the past year, there has been a seismic shift in consumer behavior across industries. One of the industries reaping the benefits of this is e-commerce, which has seen massive growth. Digital Commerce 360 estimates that US e-commerce sales accounted for about 21% of total US retail sales in 2020. Consumers spent a whopping $861.12 billion online; that’s up 44% YoY.

When it comes to the e-commerce landscape, Amazon is a significant beneficiary of this extensive increase. Numbers reported by The New York Times suggest that over the past 12 months, people spent $610 billion on Amazon. And because third-party retailers make up 56% of Amazon’s retail sales, these businesses are benefitting, too. The shift from shopping in brick-and-mortar stores to online is also paving the way for Amazon FBA (Fulfillment by Amazon) aggregators – large companies that are purchasing these smaller third-party Amazon sellers.

Investors are now looking to Amazon to acquire FBA businesses more than ever. New venture capital firms are springing up to get in on the action. But who exactly is funding these aggregators and why?

The growth of Amazon aggregators makes sense given the history of business aggregation in other markets. The type of consolidation that’s happening in the FBA space has happened in other sectors too. Currently, aggregators with large funds are eager to plunge into the market. This, in turn, delivers a high level of professionalism to the brands they acquire and accelerate growth while generating profit for their investors.

The roll-ups acquiring FBA businesses are essentially looking for companies selling on Amazon that have achieved market fit for their products and have an established network of suppliers and manufacturers. In return, aggregators offer software platforms, distribution relationships, expertise in navigating the market and scaling expertise and strategy. What does this mean for entrepreneurs? It means that in the current market, there are abundant opportunities to exit and chances to cash out.

Why are these acquisitions mainly focused on Amazon and not on any other e-commerce marketplaces? There are several reasons:

The Strategy Behind the Funding

To grow their portfolio of FBA businesses, significant aggregators such as Thrasio, Heyday, Cap Hill Brands and Perch have received billions of dollars in financing from institutional investors. Many have raised record amounts of funding. In fact, firms acquiring successful brands on Amazon have attracted over $3.5 billion in capital over the past twelve months. $2.5 billion of that raised in just the first four months of 2021, according to Market Pulse. Not all firms have disclosed their funding yet, so the true number is even higher. Capital committed is a combination of equity and debt. In addition, there are hundreds of established sellers, “private equity firms, family offices, and individual investors making acquisitions in this space; thus, the market’s total buying power spans beyond the aggregators,” says Market Pulse.

One of them is the market-leading, US-based company Thrasio, which has raised a total of $1.7 billion to date, achieving unicorn status. According to Celigo, the aggregator has acquired more than 100 Amazon businesses and has a portfolio of more than 15,000 products. And as the fastest-growing acquirer of FBA businesses, they are spearheading the aggregator space. This summer, news emerged of their plans to go public via a merger with Churchill Capital Corp V.

Another noteworthy player among roll-ups is Europe’s leading aggregator of third-party e-commerce businesses, SellerX. In August, the company announced raising €100 ($118) million in primary equity funding – the most significant sum in a financing round by a Europe-based Amazon FBA aggregator. To date, their total funding lands at $266 million. According to reports, SellerX is now one of the fastest-growing companies in Europe. In their first year of operation, they have impressively gone from zero to 250 employees.

SellerX co-founder Philipp Triebel is pleased that the money raised is equity instead of the typical debt-based financing. “What’s so exciting about this round is that all of the €100 million is equity. It puts us in an incredibly strong position to raise further debt and to keep building our portfolio by acquiring the best Amazon sellers in Europe, the US, and China,” he says.

The Boston-based technology-driven commerce company Perch acquires and operates top Amazon third-party and other D2C brands at scale. The company has raised a total of $908.8 million in funding over four rounds. Their latest funding was raised on May 26, 2021, from a Series A round. Investors include Spark Capital, Tectonic Venture, Soft Bank and Boston Seed. Perch is one of the largest aggregators in the FBA roll-up space and is recognized as one of the acquirers with a large appetite for more operationally complex businesses.

Unybrands is an e-commerce platform aimed at acquiring successful Fulfillment by Amazon and direct-to-consumer sellers looking to scale. To date, they have raised $325 million in funding with investors like DIA Management, Nathan Blecharczyk, 166 2nd Financial Services, Day One Ventures, Brian McGrath and Benvolio Group

With total funding of $245 million, HeyDay is also one of the larger acquires in terms of funds raised. The aggregator takes a slightly different approach than others in the space. They believe in the importance of brand and seem to be more selective with the businesses they choose to acquire – focusing on brands with the potential of becoming household names. HeyDay is backed by investors such as Level 5 Capital Partners, General Catalyst, Khosla Ventures and Arbor Ventures.

The founder of Boosted Commerce, Charlie Chanaratsopon, is also the founder of the Charming Charlie retail chain which he built to 350 stores and $550 million in sales. Boosted is co-founded by serial entrepreneurs, who have scaled several 9 figure businesses between them. According to themselves, “Boosted’s mission is to create life-changing opportunities for thriving entrepreneurs. We are acquiring a select group of Amazon-based brands & private-label FBA businesses that are uniquely positioned for growth in 2021.”

Who’s Funding Who in the Amazon FBA Aggregator Space?

Below is an overview of some of the most significant Amazon FBA aggregators, their total funding and the companies and investors who are funding them. 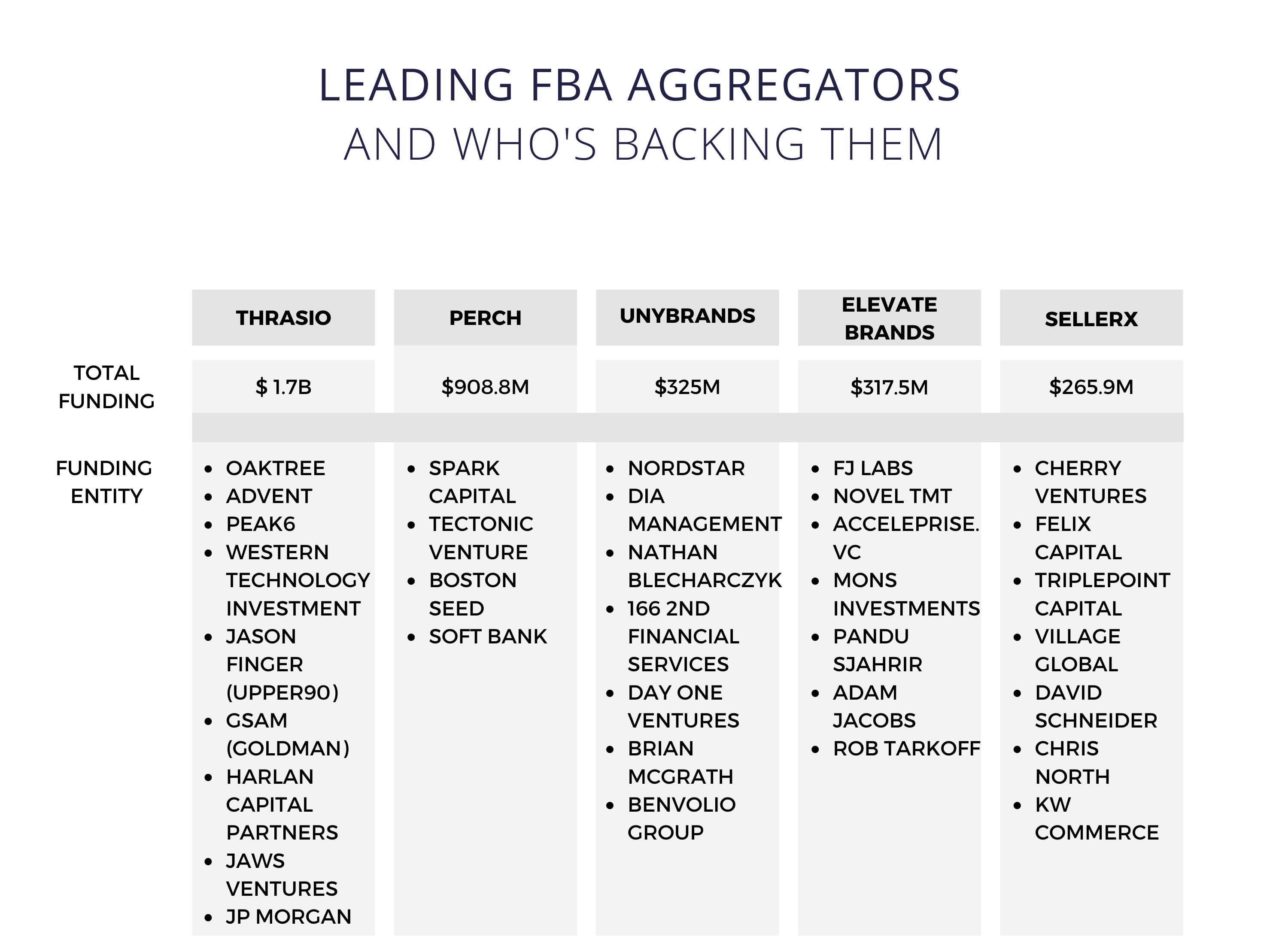 Beyond the FBA Aggregators

Aside from the FBA aggregators mentioned in this article, there are many other roll-up companies and others interested in acquiring FBA businesses. When working with your M&A advisor, you will discuss your goals to determine who the best buyer for your business is. In some instances, the answer may not be an aggregator. Other types of investors interested in acquiring these businesses include private equity firms, strategic businesses in your market, individuals and public companies that sell similar or adjacent products on a different scale. FE International has a vast array of individuals and businesses in our investor network of 80,000+ vetted buyers.

If you are interested in selling or acquiring an Amazon FBA business, please get in touch with us.

Mari specializes in covering the latest trends in the SaaS, e-commerce and content space.