These machines can ride 90 degrees sloped and even float through water with heavily armed men on board. 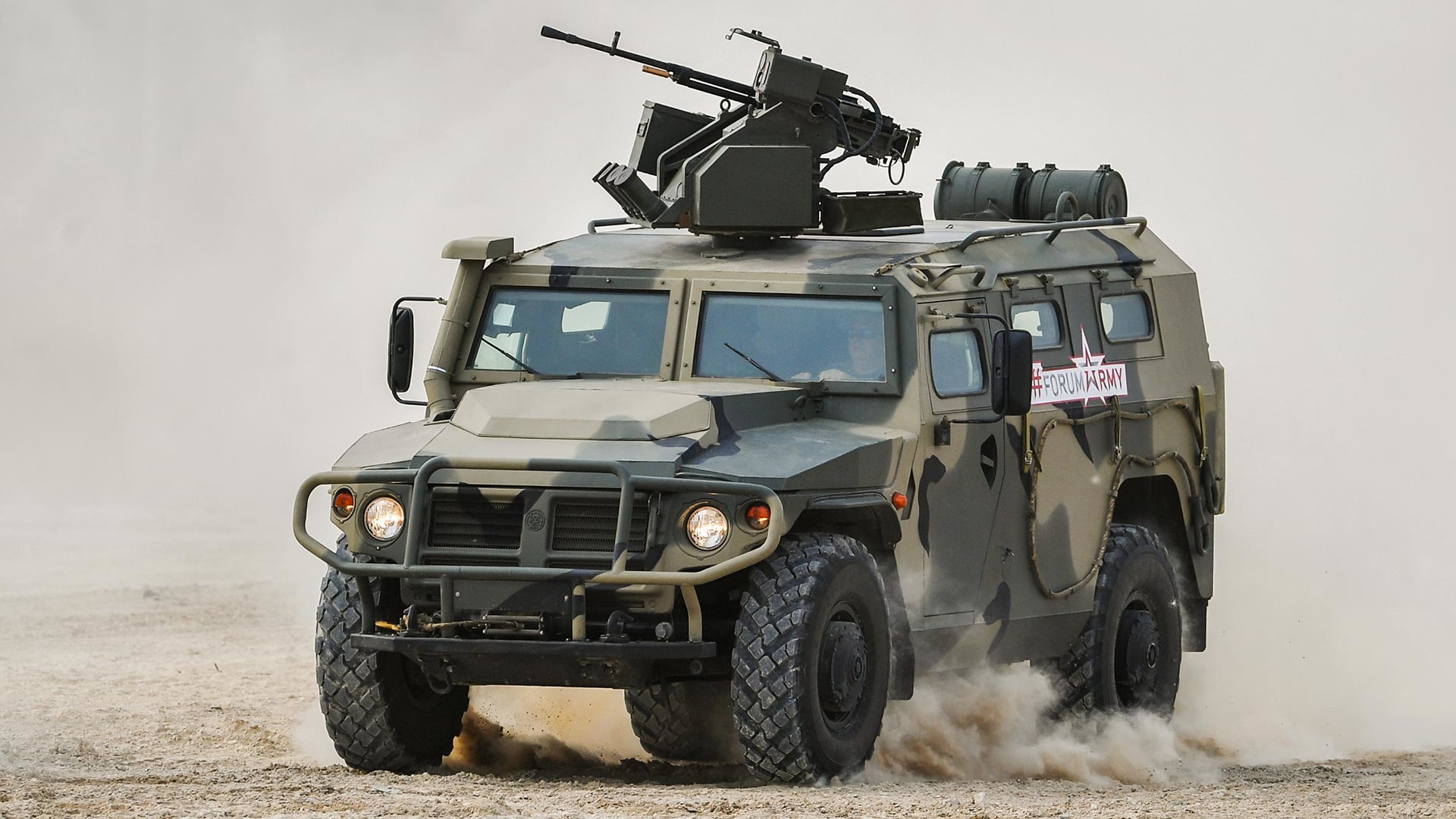 This vehicle was created for patrol and reconnaissance, as well as to provide infantries with fire support. It can carry up to ten fully geared soldiers at once, as well as carry cargo off roads where standard cars can’t ride.

The vehicle was created specially for army purposes, but there are also a number of machines upgraded for civilian purposes. Or to put it simply, vehicles with no guns on board that are assembled for wealthy people who want to have military styled vehicles in their garage.There are up to 20 variants of the ‘Tiger’ vehicle. They can “swim” over one meter deep water obstacles, they can reach speeds of up to 140 km/h with 700 kg of armor on board. There are even ‘Tiger’ variants that can withstand a mine explosion.

At the moment, the vehicle is put through a number of modifications. The goal is to create a fundamentally new shell based on the existing chassis that proved itself worthy during Russia’s military campaign in Syria.

A Truck with a Secret 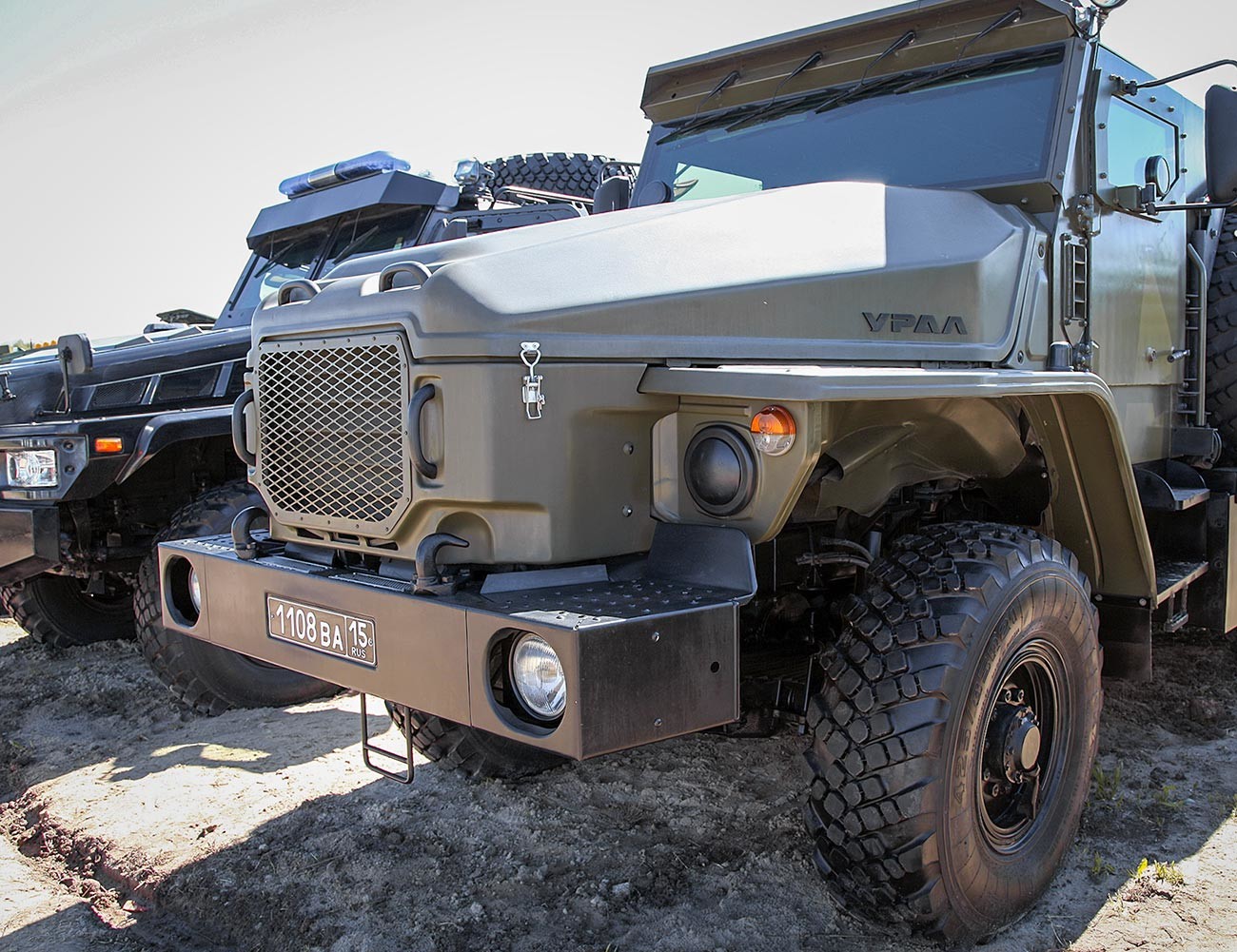 The Russian military also has the ‘Vityaz-2’ vehicle, a truck with a hidden armored module beneath a tarpaulin awning (or as the country’s soldiers call the machine among themselves – a truck with a secret).

A special feature of the ‘Vityaz-2’ vehicle is its deceptive appearance. From the outside, it looks like a standard Ural-4320, but inside it has a hidden armored shell capable of carrying up to 16 soldiers. This protected compartment can withstand direct hits of most common assault rifles’ ammo – 5.45×39 mm and 7.62×39 mm – from close distance.

The driver’s cab has even more protection. It can save the operator from 7.62×54 mm calibers sniper rifle fire.

Both modules (driver’s and soldiers’) have small slits for soldiers to shoot enemies through.

Also, the ‘Vityaz-2’ can withstand a mine explosion or an improvised explosive device in a two-kilogram TNT equivalent.

The new vehicle was the development of the Ural line, created for the Ministry of Internal Affairs of Russia. The ‘Vityaz-2’ armored vehicle received an engine with a capacity of 285 HP and a 9-speed gearbox, which provides the vehicle with a maximum speed of up to 90 km/h. It can also cover up to 1,000 kilometers on one fuel tank. 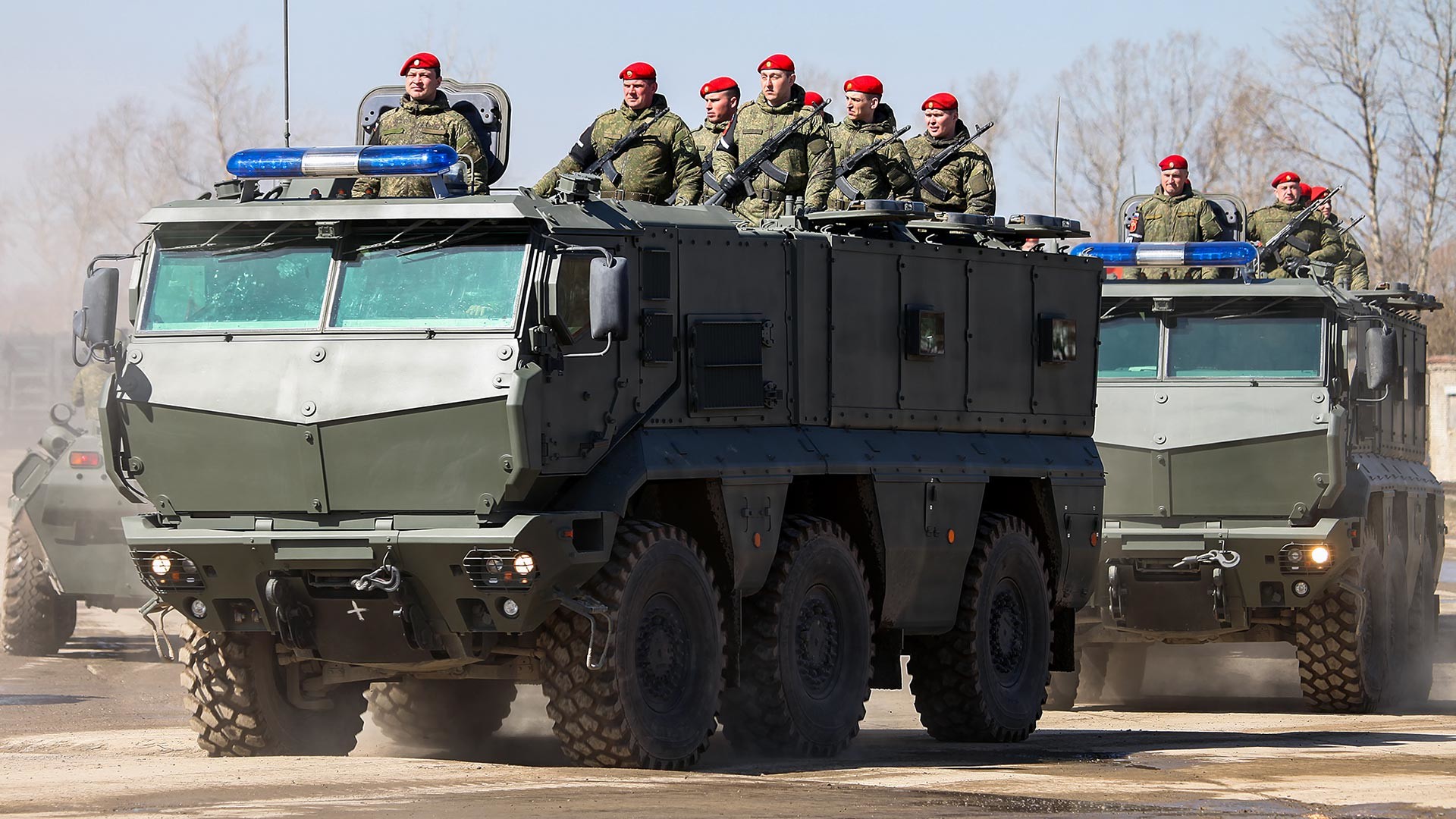 This vehicle was created to transport army personnel through all types of terrain in all possible weather conditions, ranging from -50 up to +40 degrees Celsius. Besides transportation of soldiers (it can carry up to ten soldiers) the ‘Typhoon’ can be used to carry self propelled anti-aircraft artillery, an unmanned aerial vehicle carrier, a crane, a tow truck and other equipment.

All ‘Typhoon’ class vehicles are based on Kamaz all-wheel drive chassis. Thanks to them, these 15-ton monsters can ride through snow and sand dunes, as well as cross water obstacles.

‘Typhoons’ also have some of the most advanced armor on the market that can withstand 14,5 mm armour piercing rounds.They have narrow slits for personnel to shoot down enemies and can also be equipped with remotely controlled machine guns on top. Due to these features, ‘Typhoons’ can become a mobile outpost and protect units on the march.

Engineers also placed cameras along the vehicle’s perimeter, so soldiers inside will be able to see everything that goes on around them without leaving the vehicle.

The ‘Typhoon’ was created in two, three or four axle versions for paratrooper units, as well as for infantry units. 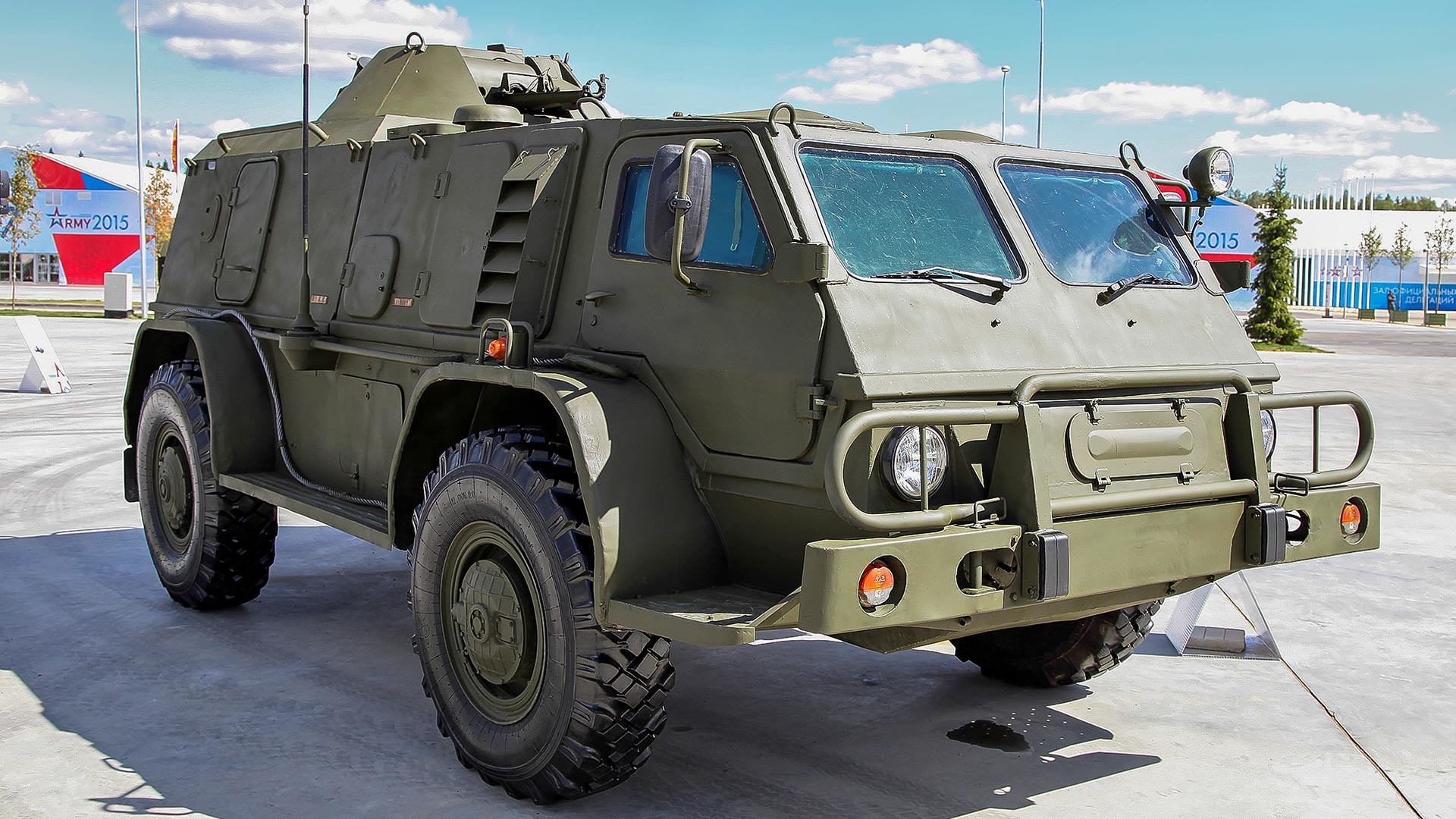 In Russian, ‘Vodnik’ (or GAZ-3937) stands for “capable of swimming in water” and can overcome water obstacles afloat, due to a specially designed hull.

The model is a special modification of BTR-80 light armored vehicle which is well-known in the Russian army for its functionality. ‘Vodnik’ is basically multi-purposed machines that represent in itself a hybrid of an all-terrain vehicle and a maneuverable vehicle.

Each machine can cover up to one thousand kilometers on a single fuel-tank and is used in the army for personnel transportation, installation work, transportation of trailers with cargo and equipment. 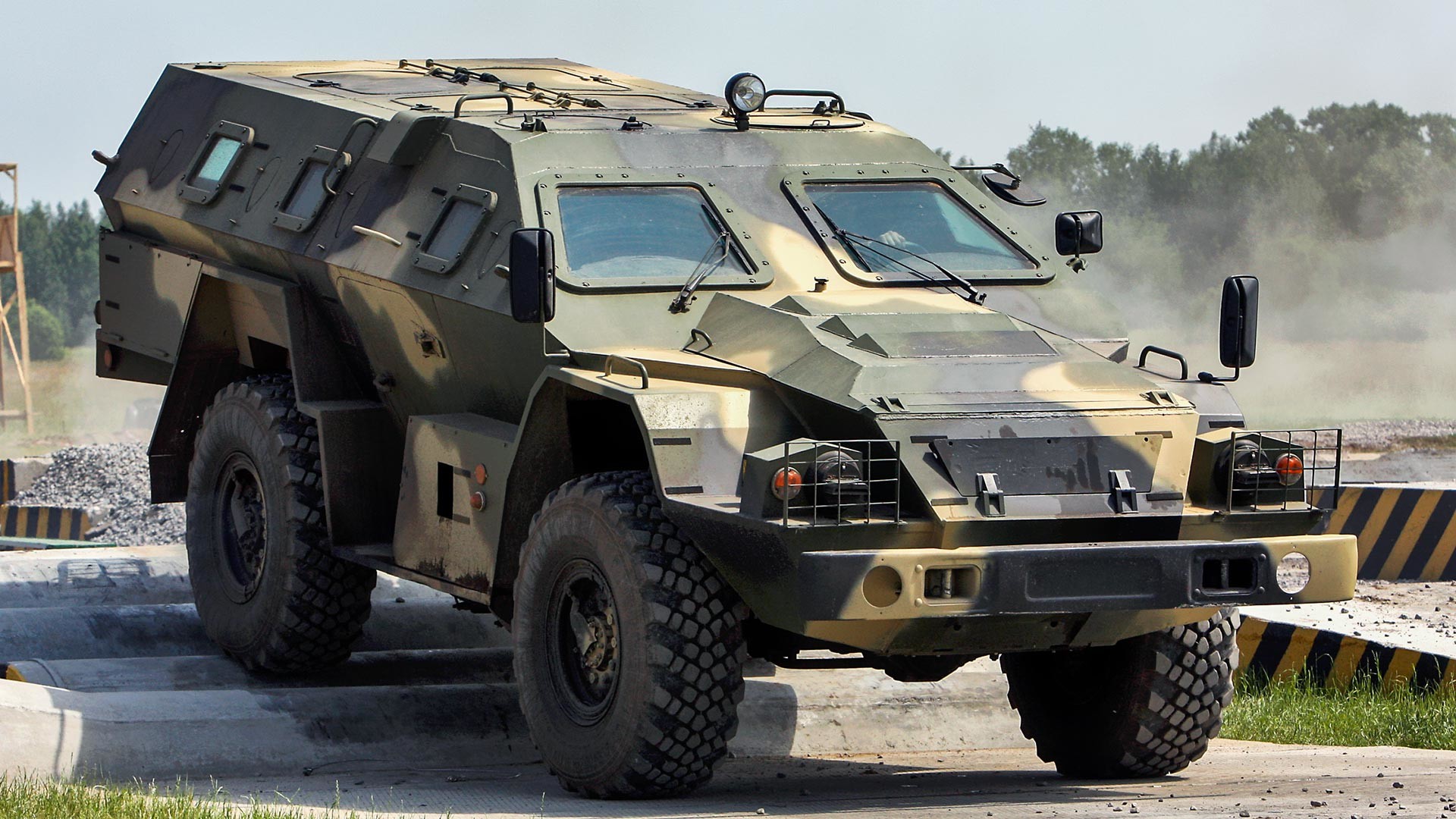 This is also a Kamaz based vehicle, but mainly created for commanding officers, as well as for medical personnel operating on the front.

‘Vystrel’ (“Shot”) has the same class of armor as the ‘Typhoon’ vehicle. It can also withstand 14.5 mm armor piercing rounds, but also survive riding over a mine in a war zone.

Nevertheless, there are not too many vehicles of this type in the military. At the moment, there are around 100 ‘Vystrel’ class vehicles in the Defense Ministry ranks.

The ‘Vystrel’ can ride over obstacles as well as T-80 tanks. It has been tested in mountain areas, as well as on plateaus up to 4.5 km high, where they greatly work in temperatures, ranging from minus 45 to plus 50 degrees Celsius. They also withstand high humidity up to 98% and wind speeds up to 30 meters per second.

It’s worth mentioning that resilience and reliability have been the main focus in all Russian military production since the end of World War II. The war created new standards for arms and machines manufacturers as the new era military gear has to prove itself capable of working in the most severe conditions (click here to find all the information on how Russia tests its weapons).